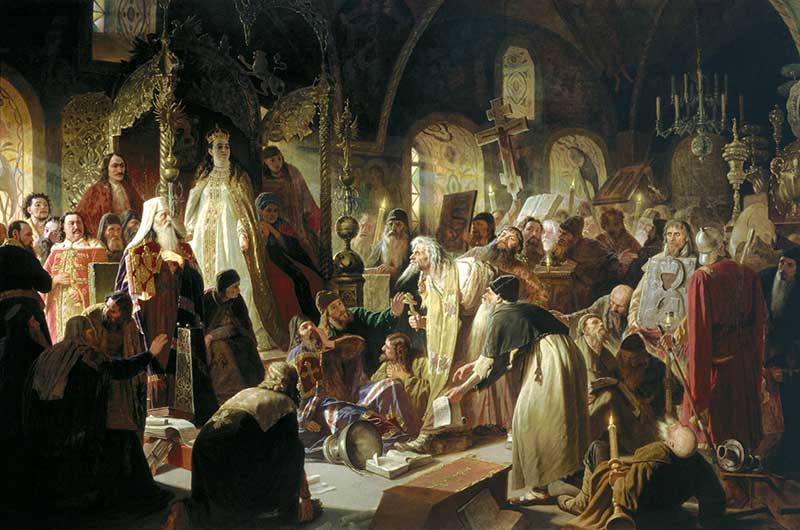 The beginnings of Lipovan Russians in Romania need to be sought in the dramatic events that caused considerable upheaval in Russia, in the late 17th century, eventually leading to the division of the Russian society, and prompting a religious and social crisis the consequences of which can still be seen. As proof of all this stand the communities of starovery Russians spread over the years throughout the world.

After that date, the Russian state and ecclesiastical authorities developed a systematic policy of persecution, and even eradication, of the raskol and of raskolniks, as official texts called the devotees of the old Orthodox faith, starovery, i.e. old believers. This made them seek shelter in less accessible areas of the empire, at the borders or in the neighboring countries: Poland, the Ottoman Empire, the Romanian principalities. Thus began the mass exodus of old believers (starovery or starobreadtzy), the first settlements over the borders of Russia at the time dating to the second half of the 17th century.

The first starovery Russians appeared in the Romanian principalities, in Moldavia, Bessarabia, Northern Bukovina, Muntenia and Dobruja, in the last decades of the 17th century, and they were called Lipovans. The first documentary attestation of a Lipovan locality can be found in a petition dated 1742 that the Lipovans of the village of Socolinti, today Lipoveni, Suceava County, addressed to the prince of Moldavia. They claimed to have been living there since 1724.

As far as Dobruja is concerned, things are not very clear as to the social origin or the areas in Russia from where the starovery came. In principle, the Lipovans of Dobruja and of Moldavia are believed to hail from southern and central Russia. Specialized literature still debates whether the Lipovans of Dobruja belonged to the community of Nekrasov Cossacks, a group detached from the great army of the Don Cossacks in the aftermath of the quashed rebellion of ataman Kondraty Bulavin, 1797-1798. After his death, the legendary ataman Ignat Nekrasov became the leader of the rebellious Cossacks. He saved his frightening warriors from the fury of the armies of czar Peter I, crossing the southern borders of the empire, into Kuban, a territory then under Crimea’s khan, Kaplan Giray. When ataman Nekrasov died (1737 or 1748, the date differs according to the source), the Cossacks settled in several stages, starting with 1749, in the Danube Delta and in northern Dobruja, first at Sarichioi and Dunavat, then at Jurilovca, Slava Rusa, Carcaliu (Kamen), near Macin, Ghindaresti (Guizdar-kyoy) near Harsova, and in the Delta localities: Sfistovca, Periprava, Chilia Veche.

We do not know for sure whether the Nekrasovites founded these localities or they just settled next to the already existing population, made up of Tartars, as is the case of Sarichiol or Ghidaresti, or next to starovery Russians, coming from other areas of Russia. The fact is that the migration of the starovery from Russia to Moldavia and Dobruja continued throughout the 18th and 19th centuries, and they naturally settled in localities where they found co-religionists, be they Cossacks or other social categories, as a rule Russian peasants or soldiers, who tried to get away from their masters’ oppression or to dodge military service which was extremely long and very rough in those times.

Moreover, we cannot say for sure, because of the lack of testimonies and proofs, whether the starovery settled in Moldavia or Dobruja in localities founded by pravoslavnik (true believers) Russians before the raskol. One sure thing is that the Romanian areas where the starovery settled were not entirely alien to them, at least to the Cossacks in whose folklore the Danube (Dunaj) took a significant place, next to “little father Don” (Don batiushka, Don Ivanovich). In connection to the above controversy, we must underline that the two opposed views put forth by experts, namely one that denies that the present-day Dobruja Lipovans derive from Nekrasov Cossacks, and the other that maintains that at least part of them come from the groups of Cossacks that once made up “the might army of Ignat Nekrasov”, could be reconciled if, when interpreting the terms used in the period’s documents, one takes into account the meaning those who issued them had in mind.

Likewise, stress should be laid on the fact that an important group of Nekrasov Cossacks settled in Bukovina, where there already existed a few settlements of starovery. In the last decades of the 18th century, after Austria annexed the region (in 1775), the Vienna government and Emperor Joseph II issued an imperial patent, dated October 9, 1783, that granted them the right to settle and freely practice their faith. At the same time, it exempted all the Lipovans in the region from military service and certain financial obligations to the state. Thus settlements of Lipovan Russians cropped up in Bukovina, like Climauti and Fantana Alba (mentioned in documents from 1780 and 1784, respectively), and later Lucavat and Mechidra.

Throughout the 18th century, the documents attest to Lipovan localities and settlements in Moldavia: in 1730, Lipovans were present in Jassy, in 1740, the Manolea locality was attested (Suceava County), and the same year, Lipovans could be found at Dumasca (Vaslui County). In the following years, they settled in practically all the towns and burgs of Moldavia.

Lipovan Russians stand out in the Romanian society by their unconditional attachment to the Christian Orthodox faith inherited from their ancestors, down to the smallest details. Even their rituals and folk customs follow closely the Christian teachings and morals, with a special religious emphasis.

That is why the greatest events in their history recognize the spiritual side of existence. The most consequential date in their history therefore is 1848, when the Metropolitan Church of Old Rite was set up at Fantana Alba (a settlement in Northern Bukovina, at the border between Ukraine and Romania). The year 1846 was a watershed, the remaking of the ecclesiastic hierarchy of the starovery exercising decisive influence on the subsequent evolution of the religious, cultural and social life of old believers everywhere. Their first metropolitan bishop was Ambrosie, a symbol of the spiritual rebirth of the ethno-confessional community.

The Union of the Principalities (1859), the War of Independence (1877), Dobruja’s joining the Romanian state, and the Great Union of 1918 are pivotal moments for the Lipovan Russians, their full integration into the Romanian society and their overture towards the cultural and civilizing influences of the Romanian world.

Naturally, there existed less pleasant and less beneficial periods, such as that, during WW II, of the Iron Guard governance and the Antonescu cabinet, when the authorities considered the Lipovan suspects and part of them were discriminated against, based on unreal and unfounded data.

During the communist years, the Lipovan Russians, like all the citizens of Romania, had to put up with a political regime that undermined the very foundation of their ethnic and religious foundations. The Romanian state formally acknowledged the Russian Orthodox Old-Rite Church in 1946, yet the opportunities to express it were curtailed to a minimum, the only form of manifestation allowed being religious services, attentively monitored by the authorities.

The open atheist propaganda and the depriving of the Church of any means of action had a negative influence on the spiritual unity of the Lipovan community.

From an ethnic viewpoint, the policy of assimilation of the minorities triggered the dramatic drop of the use of the mother tongue (Russian), although in state schools Russian was a compulsory subject of study.

The December 1989 events rekindled hope through the setting up, on January 14, 1990, of the Community of Lipovan Russians in Romania (CRLR), Obscina russkih-lipovan rumanyi (ORLR) in Russian. This organization promotes the material and spiritual assets of this ethnic group with an avowed purpose to revive the Russian mother tongue, the Old-Rite Orthodox faith, the culture, customs and traditions of Lipovan Russians. (www.crlr.ro).

Throughout its 16 years of existence, CRLR supported the publication of 35 books (since 2005 it has its own publishing house, also called CRLR). National folklore festivals have been organized to revive traditions, also national and international scientific symposia, Olympiads of Russians, school camps, and creation camp for Lipovan students.

From November 1990, CRLR has been publishing the first press organ of the organization, the bilingual (Russian and Romanian) monthly Zorile (Dawn, editor-in-chief Svetlana Moldovan). It mirrors the events in the life of the Lipovan community, aspects from the Russian and Romanian culture, the history of the starovery, religious matters, etc. (www.zorile.ro).

From October 1998, the bilingual culture monthly KITEJ-GRAD has come out in Jassy (editor-in-chief Nichita Danilov) (nichitacristina@gmail.com).